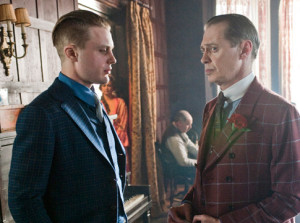 The Season Two finale of "BOARDWALK EMPIRE", (2.12) "To the Lost" has been viewed as an end of an era for a good number of the series' viewers and television critics. It marked an event that left some fans satisfied and others in a state of anger and resentment. But one cannot deny that this event – along with a few others – allowed the series to enter a new phase for its third season. ( Collapse )
Collapse