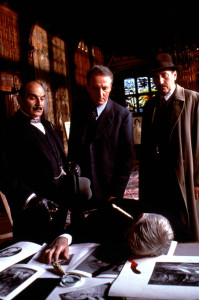 The worlds of Britain's upper-crust and artists mingled in Agatha Christie's 1933 novel called "Lord Edgeware Dies aka Thirteen at Dinner". There have been at least three movie and one radio adaptations of the novel in the past seven to eight decades. The most recent was a 100 minute television adaptation that aired in 2000 on the ITV series, "AGATHA CHRISTIE'S POIROT". ( Collapse )
Collapse