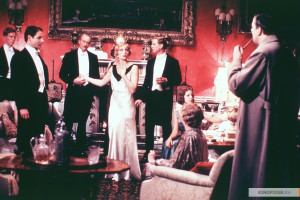 In 1999, actor Bob Balaban had approached director Robert Altman with the idea of developing a film together. Altman suggested a whodunit set at an English country estate. The two approached actor/writer Julian Fellowes if he could take their concept and write a screenplay. Their collective efforts resulted in the 2001 comedy-drama, "GOSFORD PARK".( Collapse )
Collapse