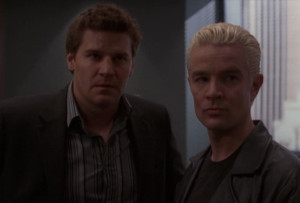 One of the most interesting episodes to air on "ANGEL" during its Season Five turned out to be the eighth episode called (5.08) "Destiny". Written by David Fury and Steven S. DeKnight, the episode is considered one of the best in the series. It also marked a relief for many viewers who had become weary of Spike in corporeal form. ( Collapse )
Collapse