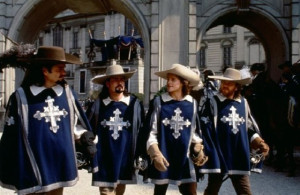 Alexandre Dumas' classic 1844 novel, "The Three Musketeers" must have been one of the most adapted stories in film and television history. I do not know exactly how many adaptations have been filmed. But I have seen at least four of them - including Disney Studios' version, released in 1993.( Collapse )
Collapse