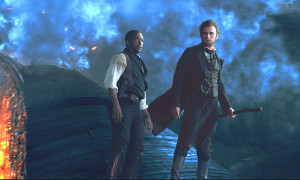 If someone had told me about three to four years ago about a fictional story featuring a historical leader and his encounters with the supernatural . . . I would have laughed in that person's face. Hell, I would have done that about a year later. Then Seth Grahame-Smith wrote a novel about Abraham Lincoln battling vampires. And you know what? I did not laugh. But I sure as hell did not take it seriously. ( Collapse )
Collapse