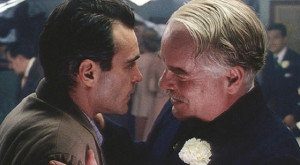 Paul Thomas Anderson seemed to be one of those filmmakers who embody what critics would categorize as a modern day "auteurist" that release a movie every few years to dazzle moviegoers and critics with his or her personal creative vision. During his sixteen years as a director and filmmaker, he has made four short films and six feature movies. One of the six feature films is his latest, "THE MASTER". ( Collapse )
Collapse