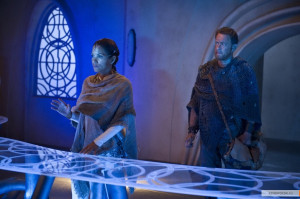 The year 2004 saw the publication of author David Mitchell's science-fiction novel called "Cloud Atlas". Consisting of six different stories with subtle connections, the novel won two literary awards and was nominated for a series of other awards, including the 2004 Booker Prize. But when the Wachowskis (Lana and Andy) and Tom Tykwer decided to make a film adaptation of the novel, the trio had trouble finding financial backing. ( Collapse )
Collapse