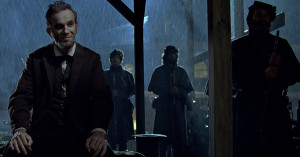 When I first heard of Steven Spielberg's decision to make a biographical film about the 16th president of the United States, I ended up harboring a good deal of assumptions about the movie. I heard Spielberg had planned to focus on Abraham Lincoln's last year in office and assumed the movie would be set between the spring of 1864 and April 1865. I had assumed the movie would be about Lincoln's various problems with his military generals and other politicians. I thought it would be a more focused similarity to the 1998 miniseries of the same name.( Collapse )
Collapse